Lube Banca Marche Macerata: Giuliani’s team faces an intense period with three games to play in just six days between the league and the Champions League. 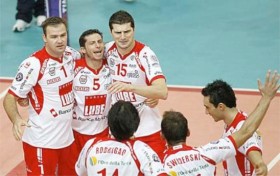 The group will first head to Innsbruck, Austria, for the Champions League as the Italians are one point behind the group leaders, Fenerbahce.

The next day, the team will directly move to Padova, while on Tuesday there will be the first of the Champions League return games, against Innsbruck again but this time in Macerata.

“We are used to play at a certain rhythm now in volleyball – said Parodi – The fact we’ll be playing three games in six days, with a few kilometres in between does not create us any trouble, we have a squad composed of top quality players”.