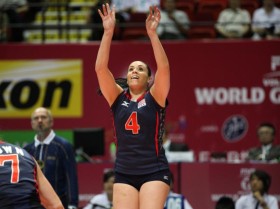 Berg, who was a member of the squad that clinched two medals this year as well as qualifying for the London 2012 Olympic Games, played in 90 sets during the 2011 season with 27 match starts in three tournaments. She averaged 8.48 assists per set while the US converted 45.4 per cent of its attack in her three tournaments with a 0.342 hitting efficiency. Furthermore, the 31-year old averaged 1.38 digs, 0.13 blocks and 0.12 aces per set while scoring 35 points.

“I am honoured to once again receive the USA Volleyball Female Athlete of the Year,” Berg said.

“To be selected out of not only the whole World Cup team, but also among all of the athletes that have been in and out of the gym this summer is a huge honour. Day in and day out we dedicate ourselves to being better volleyball players and teammates. This summer I dedicated it to being the best I could and bringing out the best in others. I hope I accomplished that and can continue it going into the London 2012 Olympics.“

Berg, who was promoted to captain at the end of the year, also helped her side clinch a NORCECA Women’s Continental Championship.

“Lindsey had a great 2011 season – both on and off the court,” USA’s New Zealander coach Hugh McCutcheon said.

Her commitment to the team and her skill, competitive drive, and leadership were huge for us