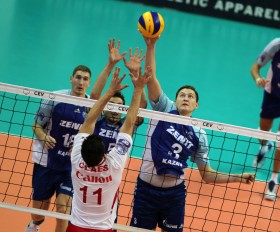 The Russians have a perfect record of three wins and no losses after the third round of action.

The Belgian guests played mainly via their Dutch opposite Robin Overbeeke while Zenit KAZAN showed a very well organized team work; An ace of Yury Berezhko called for the 19:15 in the first set and after that the Russians sailed comfortably through for the final 25-21.

Euphony went briefly up in the second set (11:8) before Zenit turned the score around via four consecutive points on the serving turn of Berezhko. Nikolay Apalikov stamped a series of massive blocks to move the count up to 19:15 for the hosts, breaking down the resistance brought by the Belgian rookie.  Apalikov alternated terrific jump serves, some more blocks and well placed spikes to pace his side and chiefly contribute to the final 3:0.

He eventually top scored for Zenit with 12 points while Robin Overbeeke squeezed in with 13 for Euphony.

“It looks like our national team players are completely exhausted after the World Cup” says Zenit head coach Vladimir Alekno.

“This may be the reason for the many mistakes we saw from the serving zone”.

“I am quite satisfied even though it is a pity that we did not exploit all the chances we had during this match. However, we still are in contention for making it to the Playoffs 12” adds the mentor of ASSE-LENNIK, Marko Klok.