He will start in Rome and will then move to Bari, determined to finish in the best possible way in Milan. Before the beginning of this hopefully successful journey, Marco Bonitta indulges in the intriguing diversion of examining the other teams. 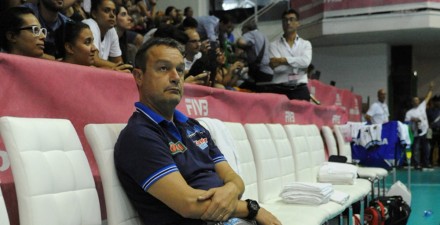 “Those days are gone, I kept only beautiful memories”, says Bonitta referring to the only World Champion title won by his squad in Berlin 2002. Twelve years later, he is now aiming again at the title, because that’s what the whole Italian volleyball movement expects. And the pressure is increasing…

“If you are able to manage it, it can be good – says Bonitta – As regards the World Championship we all know there is just one favorite team: Brazil. For the remaining teams it’s like playing roulette and we’d like to play until the end”.

Do you think that Brazil will not have any problems in the first round in Trieste?

“No, I didn’t mean that; in this sport nothing can be taken for granted. Zé Roberto’s team is certainly the favorite squad and will most probably win the Pool, but in Trieste, unlike what happens in the other cities, there are two/three teams which can spoil Brazil’s party”.

In Triestein the first round will play Serbia, Turkey, Bulgaria, Cameroon and Canada…

“Behind Brazil I see a tough battle for the second place among Barbolini’s Turkey, Serbia and Bulgaria, but with a clear distinction”.

What do you mean?

“Brazil is in pole position; for the rest it’s a very balanced pool; Serbia are a time bomb in relation to the match against the South Americans and in order to achieve the second place, which is important because of the qualification to the next round. Let me explain: at big events Serbia becomes unpredictable and dangerous. They are the very opposite of Bulgaria, a very good and physically strong team with tall players, but when it comes to achieving a target, this squad is often under pressure and loses the key matches”.

“Then we will try match by match to achieve the final round in Milan”.

What can you tell us about your team?

“Two/three months ago I’d have given you a more concrete and tangible answer. After what happened (Aguero left the Italian national team and Bosetti and Ferretti got injured) I still coach a great squad, a mixture of experience and youth, which needs to oil its wheels. Anyway I promise you that every match will be as the last one; we will play with fighting spirit, determination and technical commitment”.

WCH M: “We played a lot away from our potential” said Berruto

PHOTO OF THE DAY: Iranian fans adore their players