The volleyball career of James "Jack" Sintini starts from Trento and Trentino Volley. In September, after only one year of inactivity, during which he played and won the biggest game of his life, the setter returned to his normal activities because of the sport (the same one that played in the last twenty years). 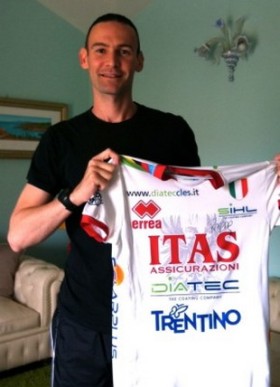 Sintini has a two year contract, that expires June 30, 2014. He played more then seventy times for the the Italian national team and won,  a European championship, one Scudetto and two Continental cups. Will he play along with Raphael to complete the pair of setters available for Radostin Stoytchev in the season 2012/13 and 2013/14 and before the leaving of Lukasz Zygadlo.

This is the first operation on the market for summer 2012 of the Trentino Volley, it is of great significance because Sintini has always been considered among the best Italian players. He will arrive in Trento with lot of desire to regain control of his career. After discovering in April 2011 that he had cancer of the lymphatic system, Sintini defeated his evil with fortitude and with extraordinary courage, the same ones that allowed him to quickly get back to shape and now he is working in the gym every day to get fit for the start of the preparations.

In Trento, the environment that he already knows well, having visited it several times last season when he showed up in the stands for games and training sessions after the end of the season 2009/10 when he trained with gialloblù with injured Raphael, he will wear the jersey number 2 and find several former teammates from the National team, as Jan Stokr, Emmanuel and Andrea Bari Birarelli

James Sintini will be officially presented during a press conference scheduled for Friday, May 25 at 11:30 at the Press Room of the Municipality of Trento Palazzo Geremia, in the street Belenzani 20.

ITA W: One of best-ever coaches in...