After two and a half hours of epic battle between Calzedonia Verona managed to overpower To Volley Latina on the road! The Yellows were two sets behind, while they needed 38 points in the fourth to stay in game! 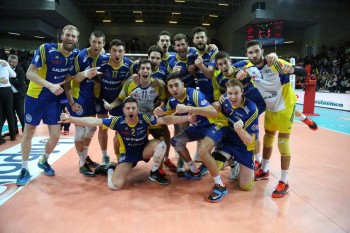 Verona did it again! Last week against Perugia, this time against Latina!

The opening two sets did not suggest that we are about to have a true volleyball thriller. Latina won both of them and was a step away from a straight sets victory. But, Verona refused to surrender! Away squad seized the third set, and then had more patience in a real marathon in fourth set.

The Yellows had to score 38 points in that set to take this game into the tie-break! But, they did it, and eventually won the game! Verona had five players with double digits – Taylor Sander scored 23 points, Aidan Zingel made 21, Mitja Gasparini added 16, Sam Deroo 14 and Simone Anzani made 12.

On the other side Latina had two players on fire. Saša Starović was the top scorer of the game with 27 points, while Tine Urnaut made 21.