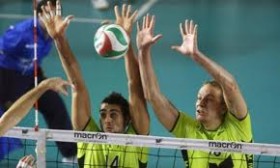 Ravenna played a good game, took a 1-0 lead but then surrendered every time at the end of the following three sets.

Antonio Babini (coach CMC Ravenna): “We started off very well and won the first set, then Bencz came on and things turned around. Still, we could have won each one of the other sets. It’s useless to linger on that defeat now, at the end of the day the team played a good game. Unfortunately at the end of sets, we lacked a little bit of composure and experience”.

HILARIOUS: Give me five, Georgiev! (VIDEO)