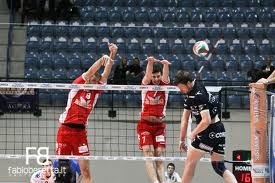 Another tough win for Monza, which has to make do with two points once again as San Giustino forced a tie-break.

Roumeliotis MVP Jeroen Rauwerdink (Energy Resources San Giustino): “This team has a very positive characteristics: they fight until the very last play. Once again today, we proved we could give a game to anyone. We always lack the last step, but I am convinced we are doing a good job in training, and that will pay off”.

Facundo Conte (Acqua Paradiso Monza Brianza): “It was great to make my debut in this new team and play today. I still have to get used to this rhythm but I’ll be ready soon. Credit to our opponent which managed to make it difficult for us in moments in which we should have sealed it. San Giustino is a good team and they had their chance until the end, they fought on every ball. Fortunately, we won it”.