ITA M: “Podraščanin and Stanković showed why they are so long in Lube” said Atanasijević

Last night Sir Safety Perugia lost against Lube Treian in straight sets. That was a big surprise for everyone. 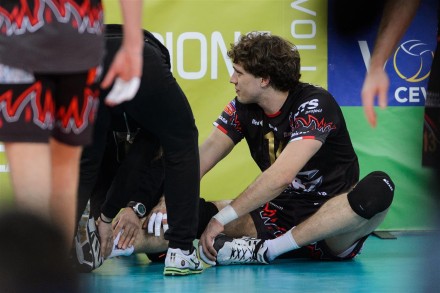 “Something wasn’t good today. I am very sad because we lost but also sad because of all these people who came to support us and who have expected much better play. This is what we did today, but we need to think about the future. Now we will try to forget this… I really don’t know the reason of our bad play.” said Aleksandar Atanasijević the opposite of Sir Safety Perugia.

What do you expect at the end of the regular season, which position on the standings?

“At the end of the regular part we should be fourth because Verona has one match more than us and we have to win all matches against the teams who are not so strong. We must be serious in these matches also but I think that in our heads we still thinking about match against Belchatow. We showed that we can play against one of the best team in Europe and that was the biggest defeat in our life. But we need to forget that and try to make our fans much happier in the future.”

What was it like to play against Marko Podraščanin and Dragan Stanković, they were amazing?

“Last season we were fighting, we were so close to the final, and this season we lost twice. The first match 3:1 and now 3:0. It’s difficult to play against them. They are really good. They showed why they are so long in Lube.” said Atanasijević and added:

“I still believe in this team and that we can do something big. Yes, we lost but the most important thing is the beginning of the next phase. Who knows, maybe we will play in the final although we lost against Lube.”

For all the money you take this year, YOU have to do something BIG, at least in italian championship!