This will be Zenit’s fifth straight appearance in the Final Four of the Champions League. Their opposite Maxim Mikhailov recounts some of the emotions he got to feel in the re-match with Halkbank where the Turks tried hard to compensate for their 0-3 loss from a week before in Tatarstan. 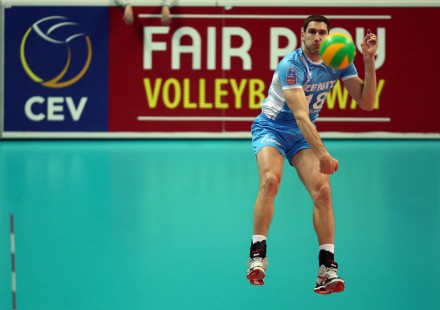 “We were not too surprised by their performance and actually we did expect that kind of reaction, since they have a roster including many elite players and in Kazan they had not shown their real value,” Maxim Mikhailov  says.

“Things developed in a completely different way in the re-match in Ankara but I was not surprised at all since this is what we expected. Tsvetan Sokolov, Marcin Mozdzonek, Michal Kubiak and all others are real world-class players and you just can’t expect they play bad for two consecutive matches, the more since they got to play the re-match on home soil.”

Halkbank was nevertheless side-lined by the absence of their Cuban-born star Osmany Juantorena , who got injured before the first leg of the Playoffs 6 and missed also the re-run in Ankara. Mikhailov rules out that Zenit underestimated their opponent following the easy and speedy home win:

“I am sure this was not the case. Qualification to the Final Four was at stake and all members of the team were well aware of this. It’s difficult to say whether Osmany’s presence would have changed the course of the game. We all know that he is a team leader and with him Halkbank is certainly stronger.”

Maxim acknowledges that he did not fear his team would have ended up playing a golden set: “We did not think about this at all. It was important to finish it off with the regular match and we focused entirely on the achievement of this goal.”

Zenit will be playing hosts Berlin Recycling Volleys in the semifinal match scheduled for March 28 at the Max-Schmeling-Halle: “I think that the Germans are less competitive than the two Polish teams but they have been preparing for quite some time to play for gold and on top of this they will enjoy the home advantage, so this makes them stronger and more dangerous,” Mikhailov says.

The second semi will be a Polish derby starring Asseco Resovia Rzeszów and PGE Skra Bełchatów. Resovia caused quite a sensation in the Playoffs 6 edging past 2013 gold medal winners Lokomotiv Novosibirsk.

“I am surprised by what the Polish team did, but they showed a couple of great performances,” Mikhailov admits. “However, if the team around coach Andrei Voronkov had played their best, the result could have been different.”

ITA M: “Podraščanin and Stanković showed why they are so long in Lube” said Atanasijević

Volleyball rules (but the unwritten ones)

Warm up for volleyball with Resistance Bands...