Energy T.I. Diatec Trentino scored probably the most important victory this season in Serie A1, two rounds to go. It beat Parmareggio Modena and took over lead in the standings! 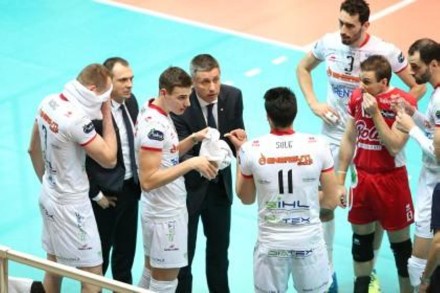 In a spectacular game, both in the stands and on the court (sold out stands – 4,820 fans), Trentino clinched triumph in the most delicate moment of the season and dethroned Modena on the table.

The first set was marked by many errors on both sides. No team had more than two points ahead. The decisive moments were block from Birarelli, then an ace by Kaziyski – 24-26.

Modena played poorly in the second set while Trentino players were more and more confident: Modena coach Lorenzetti was forced to make three substitutes to change things on the court. Boninfante, Sala and Casadei entered, but the result remained the same. It was mainly because of Trentino’s blocking (6 in this set, with 3 from recovered Solè 3). So, the proteges of Stoytchev easily took 2-0 lead in sets (18-25).

Trentino had early lead in the fourth set, but with a couple of its uncertainties, Modena shortened the gap at 22-21. Kaziyski’s (19 points) serves were the most glowing moments in the finish which was also marked by Stoytchev’s protests. So, the referee was forced to expel him. Lanza’s (18 pts.) attack closed the match – 24-26.