Italy edged Germany 3:1 (24-26, 25-22, 25-22, and 25-20) in what was supposed to be the real highlight of the third-round qualifier for the 2012 CEV Junior Volleyball European Championship – Men currently taking place in Zocca. With this result the hosts look in a very favorable position to claim a pass for the final round that is slated for later this summer in Gdynia (Poland) and Randers (Denmark). 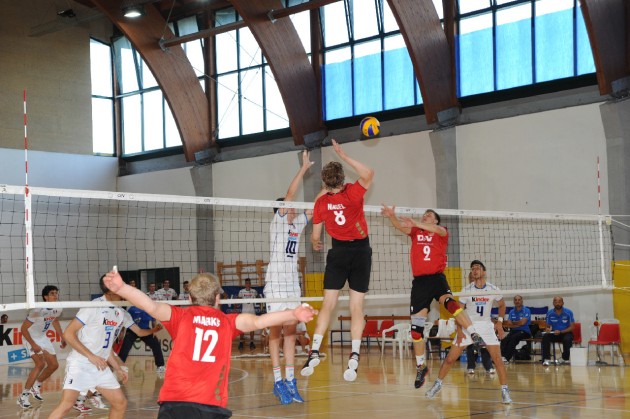 Italy caught a flying start going up 16:9 in the opening set but their opponents did not give up that easily and with a series of good services they shook Italy’s defense line, eventually tying the score at 18 all. The group around Edoardo Picco responded going up 24:21 with some blocks to stop the German spikers but the hosts eventually missed out on three set balls, with Germany turning the charts around for the provisional 0:1 (24-26). The second set followed a similar plot with Italy going up 16:11 but once again Germany fought its way back up to 17:16. However, this time the “Azzurrini” did not lose composure and could finish it off at 25-22.

In set 3 it was Germany that did initially set the pace of the game (9:7) but Italy drew at 11 and eventually went up 15:13. The score stayed very close up to 21 all before Italy showed good nerves to complete its run at 25-22. The fourth set was pretty balanced as well with Italy going to the front by the first technical time-out (8:6) and changing gear to stretch the lead up to 11:7. Germany could not respond anymore and the match ended in a 3:1 win for Italy. “It was a hard-fought game but we were very mentally strong and we stepped up in the fourth set showing some good actions there” said Italy’s head coach Marco Bonitta.