WC M: Osmany and Ivan quite enough for win over Iran 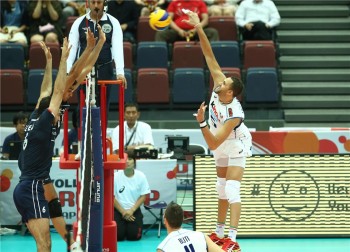 Italy continue the race for the top two spots in FIVB World Cup 2015, while Iran practically lost all chances to qualify for the Olympic Games through this tournament. In their last run to catch up with the top teams on the standings Iranian crew failed to win a single set… Italy were a lot better in crucial moments. It’s that simple.

There were two key parts in this match. The first happened in the 2nd set, when Milad Ebadipour spiked the ball out at 24:23 and gave a set to Italy. The second one occurred in the 3rd set. Iran was up ahead at 18:16, but Italy scored 4 in a row and escaped to 20:18. They performed a routine finishing afterward.

Azzurri perhaps did not played the best match on the tournament, but they had two players which made difference. Ivan Zaytsev and Osmany Juantorena were once again brilliant. Zaytsev scored 26 points and he was voted the MVP of the match, while Juantorena was just behind with 20 points, and he had the honor to finish this game with a smart spike.

WC M: Speraw – “I wondered what our mentality would be…”