An endless river of people dressed in red and white, full of enthusiasm, singing and dancing, laughing and clapping hands flowed yesterday through the streets of Treia, celebrating the Scudetto won by Lube Banca Marche. 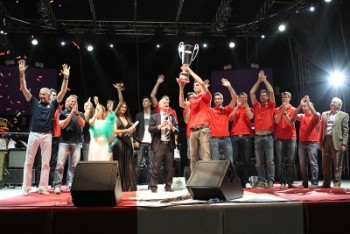 All the players were present. Captain, Igor Omrcen came to Macerata on Wednesday and Berruto flew to Treia directly from Serbia yesterday afternoon. There were thousands of fans celebrating the success along with their favourite team members.

Alberto Giuliani welcomed the crowd at 18:00 in Piazza della Republica, where more than two thousands of people attended the award ceremony.

After the ceremony, a huge dinner table was set, where players and staff embraced one by one the thousands of supporters.

There were miles of people wanting to shake hands with their heros, take picture of them, or get an autograph. A true celebrating festival full of joy and happiness.

SRB W: Serbia without Brakocevic and Malesevic to the Olympics?