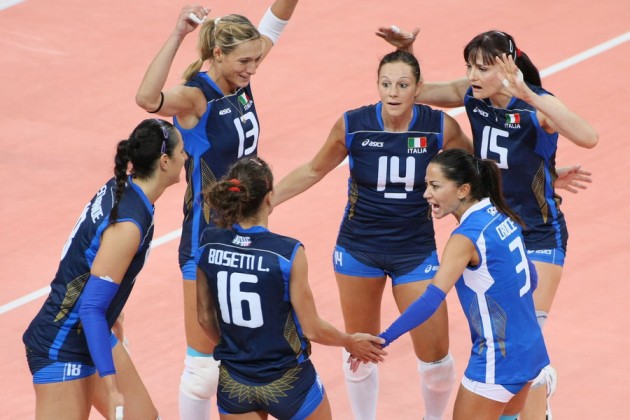 Carolina Costagrande and Antonella Del Core were the two main producers for the winning side with 17 and 16 points respectively while Lucia Bosetti and Simona Gioli charted 15 apiece.

Yukiko Ebata finished with a match-high 21 points for Japan and she was followed by Saori Kimura with 19 and Ai Otomo and Risa Shinnabe with 14 ans 13 respectively.

Led by the four of Gioli, Italy held a 9-5 advantage in blocks but trailed Japan in service aces 4-2.

The two teams looked well matched during the first set. Antonella Del Core, Carolina Costagrande and Simona Gioli led their spiking attack, while Japan countered through Yukiko Ebata and Saori Kimura. The sides stayed level through the set, but Italy’s attacks were a little more varied and their defence more solid. They pulled ahead to win the set 25-22.

Italy went ahead in the second set, with Costagrande and Gioli scoring well. Italy‘s libero Paola Croce was also digging brilliantly. Japanese setter Yoshie Takeshita co-ordinated her side well, putting the ball in good positions for spikers Ebata, Ai Otomo and Risa Shinnabe to kill. The sides were rarely more than a point apart, but towards the end Valentina Arrighetti was important as Italy won the set 25-21.

Japan came back much stronger in the third set. Takeshita found a groove and spikers Ebata, Otomo, Kimura and Shinnabe had hot hands. Despite good play from Lucia Bosetti, Costagrande and Del Core, Japan were consistent and won the set 25-20.

In the fourth set, both sides traded points through the same spikers. But Costagrande, Gioli and Bosetti -who all scored 15 points or more – proved to have a little more power than the Japan defence could take. They won a tough set 25-22. Costagrande was the top scorer with 17 points.

Unbeaten Italy face Great Britain in the third round of preliminary matches on Wednesday, while Japan, who have a 1-1 win loss record, play Dominican Republic.