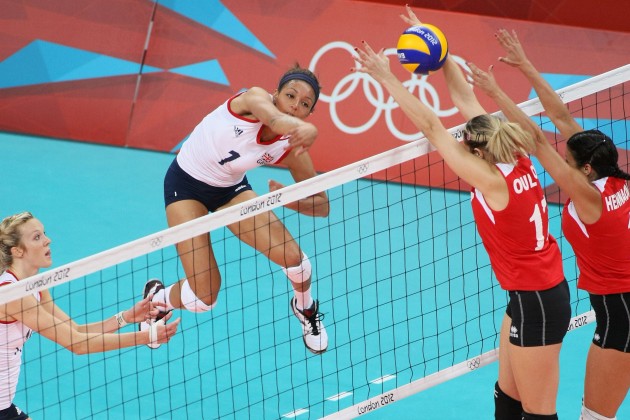 Captain Lynne Beattie was the top scorer for the winners with 19 points, including four aces and she was followed by Janine Sanders and Ciara Michel with 16 and 10 respectively. For Algeria, Zohra Bensalem and Safia Boukhima each registered four aces and15 points while Lydia Oulmou chipped in with 11 in the losing cause.

In a match plagued with unforced errors, Great Britain was benefited by 42 and gave away 35 points via mistakes.

In front of a cheerful home crowd, Great Britain kept pace with Algeria. Ciara Michel, Grace Carter and especially captain Lynne Beattie landed good spikes, while for Algeria, Zohra Bensalem dominated the scoring. With the score at 20-20 in the first set, Great Britain made too many mistakes, and Algeria won the set 25-22.

Play was again tight in the second set, with Safia Boukhima spiking well along with Bensalem, but Beattie, Michel and Carter helped Great Britain to edge in front. To the delight of the home crowd, they powered on to win the set 25-19 – the first set win of any Great British volleyball side at an Olympic Games.

Set three was close. Few winners were scored by either team, with errors being responsible for many points. Algeria captain Lydia Oulmou guided her team well, as did Beattie. Algeria won the set 25-23.

Great Britain started the fourth set well, with Janine Sandell adding to the spiking options alongside Michel, Carter and Beattie. Algeria seemed to tire and after some long rallies Great Britain won 25-19 to force a deciding set.

In the tie-breaker, Great Britain took a 6-1 lead, with Beattie again providing a steadying influence. Algeria made many errors and Great Britain was lifted by the support of the crowd. Rachel Bragg hit a great spike to see Great Britain set up match point and a Carter block sealed the victory.

Great Britain enjoyed the victory but will play an unbeaten Italy in the third round of preliminary games on Wednesday, while Algeria take on the might of Russia.