Team Anguilla qualified to play for the top position when they defeated St. Maarten in straight t sets (26-24, 25-17 and 25-21) in the final preliminary game of the 2014 FIVB world championship qualification women Round I Group D. 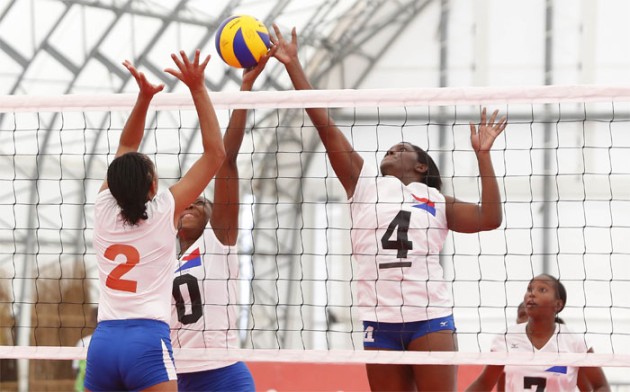 Ludiane Leveret Richardson was the lead scorer with 19 points which included 14 spikes. Susan Webster posted 15 points in support. For the losing side Captain Lathasha Mills led with 9 points while young Chesley Augustine had 8.

Bermuda and St. Maarten will determine the third place position.

Team St. Maarten proved to be somewhat of a bother to the Anguillans however as the first set was the closest of the 18 played so far. They gave another good effort in the second set but the more experienced opponents polished them off. By that time there was no gas left in the tank hence there was not much of an effort in the third set.

Winning Coach Jason Liburd was happy that they achieved another of their several objectives and that is to play for the gold medal but admitted that St. Marten proved quite nagging at times.

“Once again passing was our main problem and we have to make that adjustment if we are to be successful going forward. Nevertheless I don’t think that we have played our best yet we were just a little too complacent today”, he reported.

Stand in captain of the Anguilla team Ludiane Leveret- Richardson concurred with the coach. “We need to make some adjustments in the way we start and position ourselves when the ball is in the air. Apart from that we came here to play volleyball and we aim to win the tournament”, she intimated.

Losing Coach, Cleophas Arrindell, watch his team improve over the course of the competition. “They are improving slowly maybe too slowly but we can see incremental improvement. We are not quite there yet but I am hoping that we can put it together by tonight and still salvage a third place”, he said.

Captain Lastasha Mills took her third straight loss in good stride. “All I will tell my girls is that we have nothing to lose so let’s go out there and give it our best shot”, she chimed.

Imaginary volleyball! Have you ever had training...