CL W: Casalmaggiore didn’t get permission to train in Montichiari during F4!

Italian title holders Pomì Casalmaggiore issued an official note in regard to, what they consider as, unsportsmanlike behavior of rivals from Serie A1, Metalleghe Sanitars Montichiari, who will organize the 2016 CEV Champions League Final Four instead of Casalmaggiore. 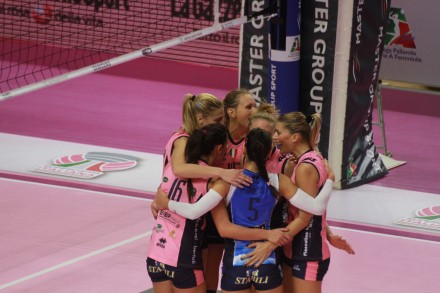 “Instead, we talked with the coach of Montichiari, Leonardo Barbieri, asking him to make mutual agreement to train at ‘PalaGeorge’ before the matches of the Champions League Final Four, from April 8 to 10. It is important to stress out that we previously obtained all necessary consents and approvals from ‘PalaGeorge’ and its manager,” Italian champions added.

“Even now, we are issuing press release in which we thank Montichiari against whom we will have the maximum attention in order to allow us to do workouts during the Final Four. And we will not quit in trying to achieve this,” Casalmaggiore emphasized.

Recall that the women’s Champions League F4 will take place in Montichiari instead of Cremona (where Casalmaggiore host their matches).

KOR M: Get out of his way – When Camejo saves ball, laptops fly around (VIDEO)

WGCHC M: “We made less mistakes than...