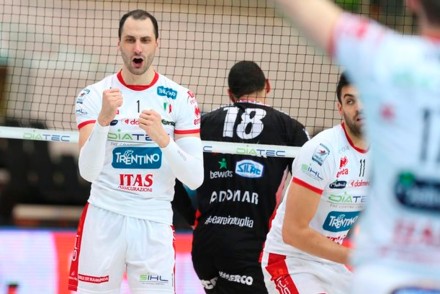 In the clash of top-seeded and eight-seeded team, not many fans gave chance to underdogs, but Latina had 1-0 and 2-1 in sets which was suspended at one moment due to water that fell on the field from a leaking roof. When Ivan Miljković gave the match ball to his team at 14-7, we have seen drama as Latina made 6-0 run to scare favorites! Osmany Juantorena finished it 15-13 while Slovenian Klemen Čebulj topped Lube’s scorers with 20 points. Gabriele Maruotti had 17 in Latina.

DHL Modena and Diatec Trentino did not allow surprise at their house. Italian runners-up struggled with Tonazzo Padova only in Set 2 of a straigh-set win, partially 25-20, 34-32, 25-20.  Thus, Modena showed real strength to Padova since they did not play with full power in the last round of a regular stage, allowing Padova to win and qualify for playoffs. The Frenchman Earvin Ngapeth stood out in Modena with 17 points while American Brian Cook had 13 in losing team.

The long awaited debut of Matey Kaziyski in Diatec Trentino occured as his new-old team prevailed Exprivia Molfetta easier than expected 3-0 (25-21, 25-15, 25-20) with Bulgarian being the top scorer – 16 points. The Greek Mitar Djurić was not in Trentino’s protocol again, but their captain was! Filippo Lanza returned into court after nearly one month of absence by replacing Kaziyski during Set 1 and Set 3. The Brazilian João Rafael scored 14 points in Molfetta.

As it was expected, the match with the most uncertainty was between hosts Calzedonia Verona and Sir Safety Conad Perugia. Verona had everything in their hands after reaching 2-0 in sets, but then, Perugia showed their strength. To be more precise, Serbian Aleksandar Atanasijević (29 pts.) and American Aaron Russell (24 pts.) showed their strenghth and one of the most amazing turnarounds this season in Italy occured! Uroš Kovačević collected 20 in Verona.