ITA W: Rebellion against new rule – Conegliano might give up on European Cups!

Major Italian teams rebel against the new rule of national volleyball federation regarding the number of foreign players in Serie A1 for the season 2017/2018. 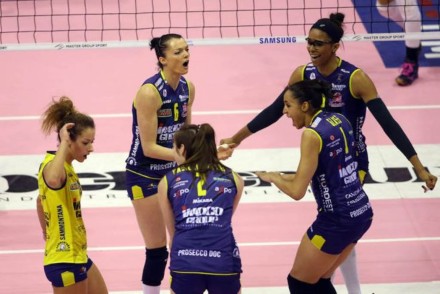 Italy’s Volleyball Federation plans to accept the rule which will allow only three foreign players in line-up in Serie A1 and to introduce it starting from the season 2017/2018.

Italian champions Imoco Volley Conegliano and Igor Gorgonzola Novara are against it. Conegliano even warn Italy’s federation they will not participate in European Cups in that case.

„If the current rule on foreign players remain srelevant in 2017/18, we will participate in European Cups. If it changed, as it was presented in these days, we will give up, if we will qualify, and that includes the Champions League! Spending money to get players from other countries will not be worth,” said Pietro Maschio, the co-president of Conegliano.

“I share the opinion of Maschio. The club’s investments are important and deserve special attention: more foreign players playing in our championship, the level is higher and vice versa. The European Cups cost a lot in economic terms. Unless a team is competitive, there is less or no chance of winning. To compete only to attend, without having the chance to win, it’s not nice for anyone” said President of Novara, Giovanna Saporiti.

ITA M: Savani was discharged from the...