“More than a bad day for us, it was our opponent who put us under pressure with the serve," said Matey Kaziyski after the unexpected lost in Latina. 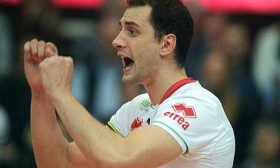 “They were playing extremely focused and not giving anything away. We made the mistake of getting nervous instead of finding the solutions. Still, in the end the level of play was excellent”, added captain of Trentino Volley.

With this lost Trentino moved to the second place in Serie A1 ranking.

Macerata is first after tough win in Verona in five sets. Third Cuneo had to fight with Modena more than two hours, claiming victory in the fifth set.

“Modena played well the first two sets and was stronger than us, then we got better and found the resources to turn things around, we never gave up. This is the most important thing and the key to the game: our reaction and tenacity. We made less mistakes from the third set and played more intelligently”, commented the game libero of Cuneo Hubert Henno.