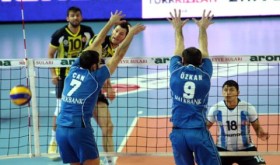 FB Grundig set a pace 4:0 as an early time out occured, blues returned from the bench so fresh 4:3 but one point gap was not changed at first break, host sped up with wing attacks based on Emre Batur and Leonel Marshall 15:11, Halkbank finished time outs then. After the break, Croatian spiker Tomislav Coscovic contributed well to 25:21.

Ankara staff seemed better early in second set via Gundars Celitans 7:8, Peter Platenik and Can Ayvazoglu were the additional players fighting 8:12, so that, Argentinian born coach Daniel Castellani called a time out. Even though guest team led the second mandatory stop 13:16, local heroes fought back bravely until 16:17 where Halkbank request a stop. Service round of Celitans was frustrating for FB Grundig, Latvian player scored twice behind base line and a back court attack to 18:23, blues seized set 19:25.

Halkbank improved team work in third set and move up 1:5 earlier, but FB Grundig bounced back once again and game tied at 10, host put the pressure and led the second tech time out 16:15. Everything was good for home side but made too many unforced errors on reception 16:20, yellow dark blue players showed another enormous performance 19:21 but Celitans did not let them go more at all 21:25.

While starting fourth set, FB Grundig had Serbian star Ivan Miljkovic and Soner Mezgitci joined team on the court, this substitutions brought a provisional lead 7:3, nevertheless guest team quickly caught up rival at 9, however locals defended opposite attacks well to arrive second break 16:13. None of the teams snatched set although FBG provided 22:18, some replacements brought Halkbank back to life 22:20, a tie break was seen as locals put the last stop 25:22.

In final set, a tremendous struggle was happened on the court as host led courtside change 8:7, then FB Grundig increased tempo via Miljkovic to 12:9. After Halkbank’s second time out, two consecutive blocks and a service mistake declared match result 3:2 for FB Grundig. Last set ended 15:10.

TUR W: Galatasaray down Sarıyer to interrupt their...

Guidetti awarded Man of the Year in Turkey