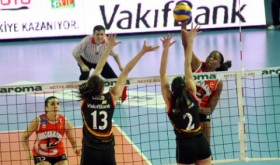 Vakifbank set a pace to 6:2 as Eczacibasi was having an early time out, afterwards, neslihan Darnel took the stage as Oranges caught up rival at 10, Mirka Francia contibuted well and locals requested a time out either 12:14. After Leading second break 13:16, Eczacibasi did not make simple mistakes like their opponent did, seized set 20:25 at the end.

Nothing was good for home side in second set, once Mirka started serving, Vakifbank TT was not able to receive, could not set effective attacks to 2:12, home team’s Italian born coach Giovanni Guidetti identified Songul Gulsoytrak as the new libero instead of Gizem Guresen, guest staff finished the set 17:25.

Host changed the rotation and some players in third set, this made them a little bit competitive 7:8, they followed opposite so close at the second mandatory stop 15:16. Even though Vakifbank tried different players in remaining part of the set, but it did not work as Eczacibasi snatched the set 19:25, match over 0:3.

Lucia Bosetti for WoV: “Vakif is one...