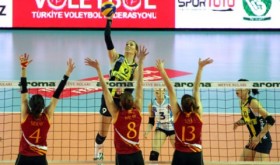 As a result of National rules, only Galatasaray supporters were ready in the hall, yellow red shirt ladies used this advantage in first part 8:6, developed game when Italian National setter Eleonora Lo Bianco came behind service line 12:7 as FB Universal asked for second time out. Blowing with Gokcen Zop, GS led a 16:10 in second break, but invincible leader scored 3 in a row 16:13, hence, Serbian born coach Dragan Nesic took the first time out, however FB was solid to tie at 18, Galatasaray sped up once again 22:18 and clinched set 25:20.

Guest team was a perfect storm early in second set 3:8, not affected by locals’ time out at 2:5, unstoppable FBU continued playing excellent, whatever Nesic did was not useful including four substitutions and a time out 5:16, crushed rival in this part 10:25.

FB Universal arrived in first tech time out 5:8 in fourth set via Eda Erdem’s services, also blocked opponent attacks over the net to come to second break 10:16, increased tempo as much as they could and won the match 3-1 having last set 20:25.