Lausanne, Switzerland, January 5, 2012 - It is with great sorrow that the FIVB announces that honorary vice-president and former 1st executive vice-president Mr Yasutaka Matsudaira from Japan passed away on December 31, 2011. He was 81 years-old. 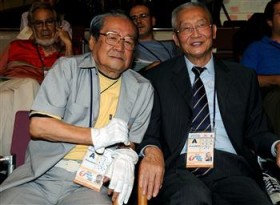 “The whole FIVB family feels sadness at the loss of a faithful colleague and friend of ours,” FIVB President Mr Jizhong Wei said in a letter of condolence on Thursday.

“For many years, he contributed greatly to the development of volleyball not only in Japan but also in the world,” JVA president Taizaburo Nakano said.

“He received respect from around the world as a wonderful leader. We are now filled with deep sorrow to lose one and only person like him. He was a treasure in the volleyball world.”