Decision of Kalamaria’s team to resign from Volleyleague because of economic problems and the return of last year’s championship MPV Ronaldo Despaigne for Iraklis. 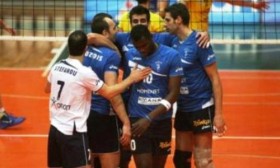 On Tuesday’s games Olympiakos had easily won 0-3 (23-25, 16-25, 24-26) against Kifisia. For the previous year’s champions Andres Roland Himenez scored 15, Marek Novotny 10 points. The most valuable player of this game was the Greek middle blocker Giorgos Petreas who scored 15 points with 82% in excellent attacks and 5 blocks.

In Thessaloniki Finikas Syrou won with the same score 0-3 (21-25, 17-25, 23-25) Aris team. Finikas Syrou did not use the injured middle blocker Andjelco Dangubic but Greek players like Soultanopoulos, Vasilis Kournetas and Ilias Lappas were in a great day. This was the first game of Zenia Gortzianouk for Syros team. On the other hand the team of Aris was mediocre having Labis Babalioutas as the new libero. Babalioutas came to Aris after the decision of Kalamaria team to resign from Greek Volleyleague because of huge economical problems. This decision changes also the Volleleague standings because all the teams is losing the won points against Kalamaria.

On Wednesday games Iraklis succeed to win 3-0 against Pamvohaikos. Iraklis could not used the injured Greek setter Kostas Prousalis and the Latvian outside hitter Medenis Ansis. Also previous week the Latvian middle blocker Victor Korzenevics left from the team of Thessaloniki. On the other hand this was the first game of Ronaldo Despaigne with the team of Iraklis and he was effective as usual. Kostas Xristofidelis and Andreas Kravarik gave their best to won the three points against Pamvohaikos.

Best action of 9th (the previous) round games VIDEO