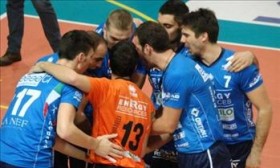 Besides Janusek and Koresaar, at the last minute the name of Moretti was added to the players missing because of back pains. But the club won’t go crazy after a somewhat logical defeat. Besides, the league table remained almost the same.

“Unfortunately, Morettis back problem forced us to line up the second libero as spiker – explained coach Fracascia – We faced this game thinking about it as a training session to prepare the next game, we had never tried this line up, not even in training. It was complicated for everyone, and there was Castellana on the other side of the net who played a good game”.