Two powerhouses collided in the 10th round of Italian Volleyball Men’s Championship while champions lost their second consecutive defeat! 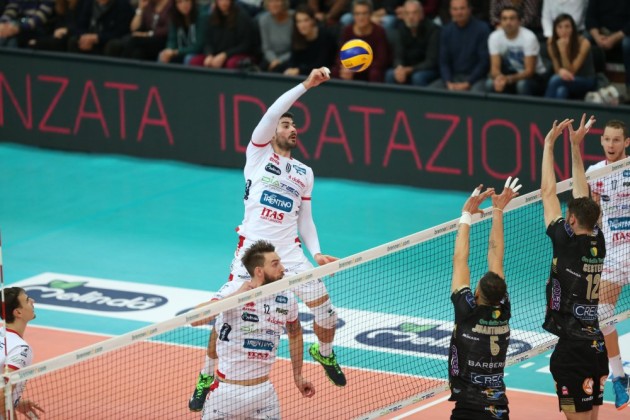 Diatec Trentino kept their invincibility in Serie A1 and they did it against giants Lube Civitanova 3-1 (25-19, 23-25, 25-21, 25-20)! Belgian Simon van de Voorde scored 13 in winning team while Simone Giannelli had amazing 7 points (4 from block) conidering the fact that he is a setter. In Lube, Bulgarian Tsvetan Sokolov collected 15 points.

Something strange is happening with title holders Azimut Modena. They suffered second loss in a row, both to teams far from title aspirations – Gi Group Monza and now Exprivia Molfetta 3-1. Another bad news to Modena fans might be Earvin Ngapeth. Frenchman did not play last game end entered as substitute today (2 points only). There is no explanation from the club on the situation with him. Giulio Sabbi highlighted Molfetta with 32! Serbian Nemanja Petrić had 14 in Modena.

New Sir Safety Perugia coach Lorenzo Bernardi debuted with confident victory over Gi Group Monza, on road 3-0. For the first time this season, Perugia played with both Ivan Zaytsev and Serbian Aleksandar Atanasijević in line-up (Zaytsev playing as receiver – 13 points including 4 aces, Atanasijević as opposite 12 points).

ITA M: Lorenzetti – Enjoying myself in...