What a demonstration of power of Lube Civitanova over fierce rivals Diatec Trentino in Round 23 game of Italian Men’s volleyball Championship, Serie A1, in a game that supposed to be a derby! 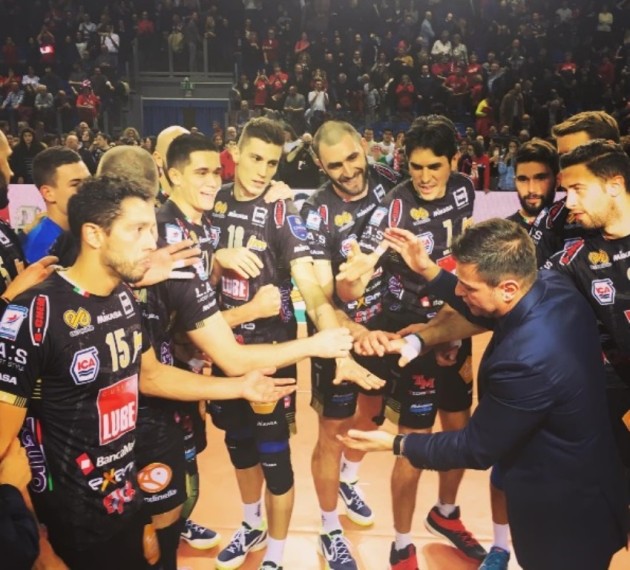 How else to call a straight-set win of Gianlorenzo Blengini’s proteges in Serie A1 classic vs. Trentino, in which they gave away only 50 points to opponents, than a demonstration of power? When these two meet, a game usually ends in five sets, but not this time, 3-0 (25-21, 25-14, 25-15).

It was a remarkable show of Bulgarian Tsvetan Sokolov and Osmany Juantorena, who scored 19 and 14 points, respectively, while Lube had 10 aces comparing to only one from Trentino. Not to mention blocking – 11 vs. 6.

With this win, Lube secured first place in the Regular Season, having nine points more than the closest rivals Sir Safety Perugia, three rounds to go.

Perugia struggled with Gi Group Monza but managed to pull out a win worth three-points in their race for position number two for the playoffs, 3-1. Perugia coach Lorenzo Bernardi had an idea to rest Ivan Zaytsev today (suffers knee injury) but was forced to send him in on the floor in the fourth set. Serbian Aleksandar Atanasijević had 22 for the vice-champions.

Top Volley Latina and Bunge Ravenna achieved highly important victories in their fight for the playoffs.

These six teams sealed playoff spot tonight, but the order might change in the next three rounds: Lube, Perugia, Trentino, Modena, Verona and Piacenza. There are two more vacant places…

ITA W: Sansonna back in Novara