Liu Jo Nordmeccanica quickly recovered from an unfortunate 3-2 defeat to compatriots Imoco Conegliano in the 2017 Women’s Volleyball CEV Champions League, four days ago, and won an important match in the national league, in Round 19. 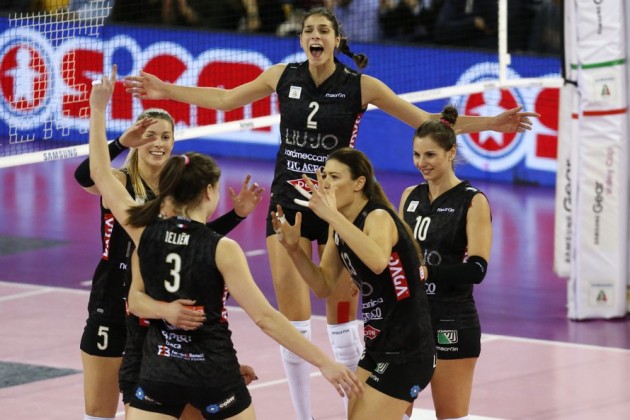 Modena took three very important points for their ranking in the Regular Season, 3-1 (15-25, 25-18, 31-29, 25-22) over hosts Pomì Casalmaggiore, to approach sixth-placed Yamamay Busto Arsizio (a spot that ensures direct qualification to the playoff quarter-final) to only one point. Modena also got a good encouragement before Champions League decider for the participation in the Playoffs 6 against Polish Chemik Police, on Tuesday, February 28.  Starting opposite hitters of both teams suffered injuries in the third set, except that Croatian Samanta Fabris (knee injury) from Casalmaggiore did not return to the game anymore unlike Serbian Jovana Brakočević-Canzian from Modena. In addition, Modena was deprived from the help of Belgian Laura Heyrman from the beginning of the clash. Ilaria Garzaro topped Modena’s scorers with 15 points, while Serbian Jovana Stevanović had 16 (5 blocks) on the other side.

After the above mentioned marathon match against Liu Jo Nordmeccanica Modena in the Champions League, the leaders and reigning champions Imoco Conegliano beat Metalleghe Montichiari 3-0, increasing the gap over second-placed Pomì Casalmaggiore to 10 points in the standings. Serena Ortolani from Conegliano scored game-high 20 points. Serbian Sanja Malagurski collected 18 for Montichiari.

NO ONE CAN STOP THEM: Sada Cruzeiro retain South American Club championship trophy!