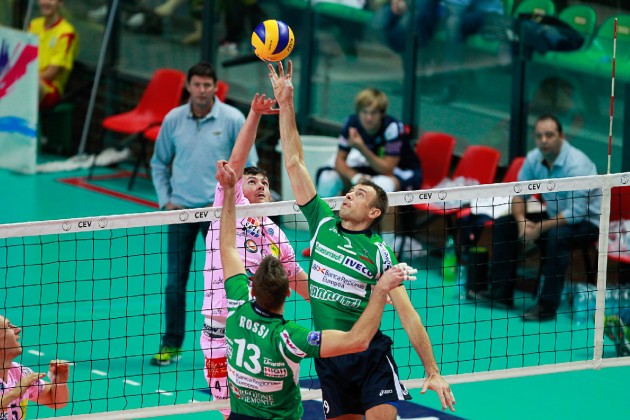 Home mentor Roberto Piazza opted for a starting six including setter Grbic and opposite Sokolov, outside hitters Antonov and Ngapeth, middle blockers Kohut and Rossi, plus libero De Pandis. CUNEO caught a good start (8:5) and did maintain control of the operations all the way through the first set (14:10 and 23:16) pocketing it at 25-17 without losing composure.

Things got a little more complicated in set 2 where Arago de SETE went up 5:9 and 13:17 before Piazza substituted Antonov with Della Lunga and CUNEO got back on track (19:22). It was a very close run where a couple of aces by Nimir Abdel-Aziz restored the balance and CUNEO finished it off at 25-23 for the 2:0.

Arago de SETE enjoyed a good start also in set 3 (6:8) and continued to set the pace of the game (11:17 and 14:19) also halfway through this section. However, the hosts fought their way back and it was their French player, Earvin Ngapeth, who closed it out for a second 25-23 and the final 3:0.

“Arago de SETE has developed a lot in the past couple of years and I liked very much their middle blockers tonight” said Piazza after the game. “We did too many stupid errors in the second and third set but the addition of Abdel-Aziz and his contribution from the serving line changed the course of the operations in the second set. I really hope he can become one of the greatest setters out there”.

“I think some individual skills made the difference in this match, like for instance the serve of Nimir Abdel-Aziz in the second set. I am sorry because we were twice in the lead and could not keep it until the end. We played as good as we can, at the moment we are trying to combine our European campaign with the national league and it is not easy” stressed Patrick Duflos, head coach of SETE.