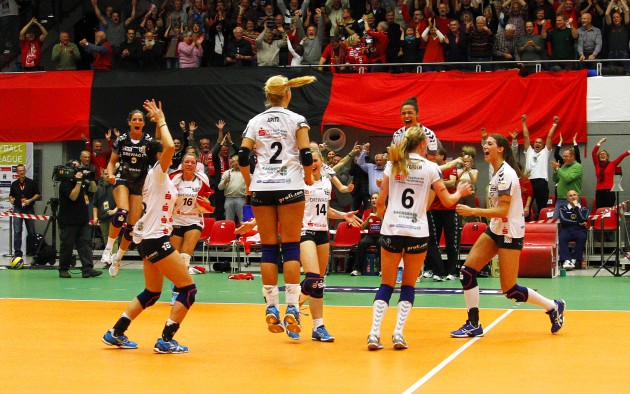 In the first set the teams had some difficulties in reception as both sides were serving really strong. After DRESDNER SC had stabilized this fundamental, they took the lead and claimed the first set (25-21).

Legendary setter Magdalena Sliwa already entered the game by the end of the first set for the guests and she anchored her team in set two to a 25-19 win.

In set three everything seemed to go well for the Polish team as they were up 23:18 but DRESDNER SC came back strong and won this section of the game with the score of 26-24.

In the fourth set the Polish team did show the right power in serve, block and attack so they tied the game 2:2 (25-21).

In the dramatic last set it was again DABROWA GORNICZA that took the lead with 7:4, but pushed by the home crowd DRESDNER SC came back into the game. In the end the two young DSC-rookies Magdalena Gryka and Lisa Izquierdo scored the final points for the home side and made the unbelievable happen.

The top scorers of the game were the Polish national opposite Joanna Kaczor (28 points) and Dutch lady Judith Pietersen (21 points) for DRESDNER SC.

“Both teams served very well which lead to difficulties in reception on both sides. Nevertheless, we fought bravely, played with a lot of passion and were pushed by the crowd to our win” said home coach Alexander Waibl after the game.