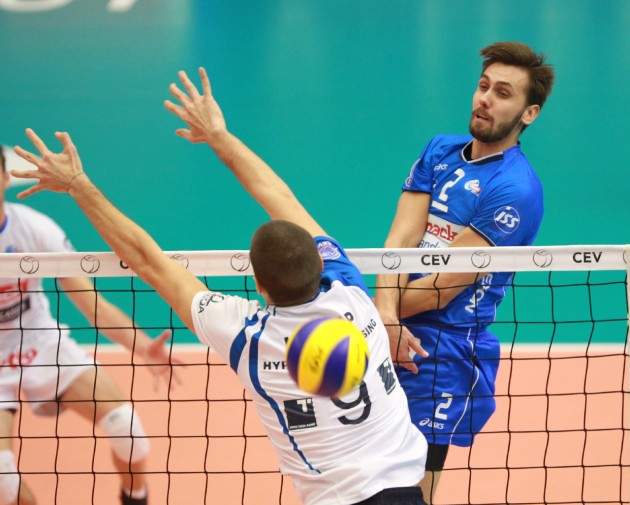 The game started with a lot of serving errors on both sides of the net. Local opposite Hendrik Tuerlinckx kept his team in the match with impressive attacks while INNSBRUCK performed better in defense and blocking. Hypo Tirol took the first lead at 6:8 before Eemi Tervaportti scored an ace for the provisional 9:10. Opposite Jimenez got more involved in the game of the guests and brought his team to the score of 15:16. With setter Tervaportti at serve Knack could make a first gap (from 16:16 to 19:16). A kill-block on Jimenez put the 21:17 on the scoreboard and Tuerlinckx stretched the margin to 23:19. INNSBRUCK fought back to 24:22 but Tervaportti finished the set with a surprising second touch ball.

With Tervaportti behind the serving line the hosts caught a marvelous start in set 2 (8:2). Hypo Tirol coach Stefan Chrtiansky tried to stop the local train with a time-out and two substitutes (Koraimann for Boff and Koch for Kaszap) but it was all in vain. At 11:3 INNSBRUCK took its second time-out but it didn’t come any closer. Knack wing spikers Gertjan Claes and Dirk Westphal scored in turn and with two aces Claes brought the score to 19:7, paving the way for a massive 25-12.

Captain Tuerlinckx showed the way to his team in the early phases of the third set contributing to the provisional 4:1 before middle-blocker Paulides (who had become father for the first time on Monday) scored two times in a row (8:4). Diagonal attacks of Berger brought INNSBRUCK a little closer (10:8) but Knack kept control over the set. Clever attacks of Claes and Westphal brought their team up to 16:9 and ROESELARE got back in its flow with Tervaportti at serve and the guests suffering in reception (22:12). Tuerlinckx put the crown on his performance (23:13 and 24:13, ending up with 21 points) and a last error by Jimenez finished the set (25-14) and the match (3-0).

“We had a plan and had prepared well but it is always a question whether everything turns out right on the field. After a hesitating start we could bring our opponents into trouble with our serve floats. One after one their wing spikers failed in reception and with an impressive performance by our captain Hendrik Tuerlinckx in attack we could claim this first home match” said Knack head coach Emile Rousseaux.