TRENTINO Diatec scored its fifth consecutive victory in prelim Pool C of the 2013 CEV Volleyball Champions League – Men by defeating TOURS VB of France. The Czech opposite Jan Stokr was named MVP of the match. 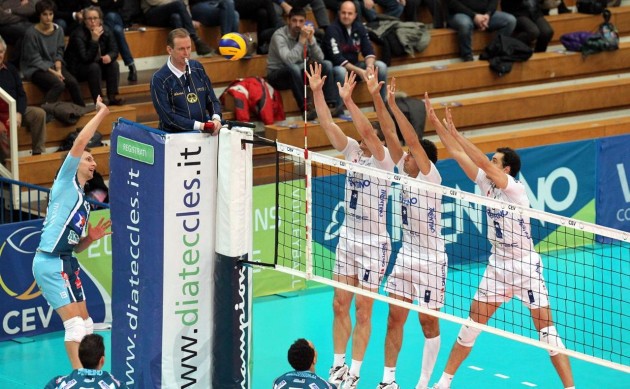 The guests of TOURS VB caught a good start with two aces in a row by the spiker Emmanuel Ragondet and took the lead with a margin of three points (5:8). TRENTINO struggled in reception and got confronted with some spectacular defense of the French side. TRENTINO after a positive break (14:11) seemed to lose a bit of concentration and TOURS VB continued to chase the hosts up to a tie at 16. The first set was played point for point; at the end the Italians took a crucial lead and wrapped it up at 25-23.

The same story unfolded in the second set where TOURS VB set the pace of the game via a very good performance from the serving area and in blocking (5:9). TRENTINO got back on track (19:16) but TOURS did not give up and both teams fought bravely for a few more rallies but in the end it was TRENTINO Diatec to win this section of the game (25-22).

With two sets in its pocket and sure of the first place in Pool C TRENTINO Diatec started the third set more relaxed maintaining nevertheless a good quality of play; quite easily the four time world champions of TRENTINO notched the set (25-16) and the game with a speedy 3:0.

CL M: Radostin Stoytchev – “I am happy for this victory, but I think we did not play a good game”