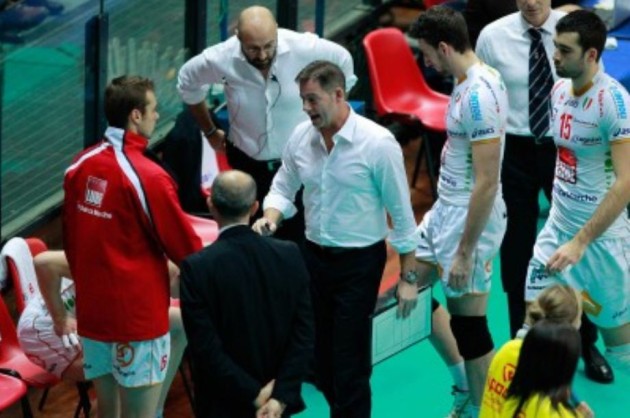 Alberto Giuliani: “I have a big regret for the first set, in which it is true that Cuneo beaten us, but a team like ours can’t lose with 14 points. Thereafter, we began to play and strive, taking away the a point, which is very important for the ranking, since that allows us to retain the top spot. It’s never easy to play here, I can feel partially satisfied since we are going through a period in which our team, for known reasons, has several problems. Starovic? He played well today but he lacks continuity, because he was possible only to train a little. I look forward with confidence, because he is a really important player. Kooy is slowly entering into our game mechanics. In the fourth set he gave us a big hand.“

Hubert Henno: “In the end I think we can be happy with the point won, because under the conditions in which we are it is certainly not easy to play here in Cuneo, against a team of this caliber, and be able to prevail. We have to keep working hard, hoping that sooner or later a little ‘luck turns on our side.“

Sasa Starovic: “We started badly, but then we fortunately recovered, managing to bring the game on the edge of balance until the fifth set. It is an important point that we bring home, today we take it in a positive way but surely we must return to winning as soon as possible. My condition? I’m getting better, but still not the best, because in recent times I have not been able to train with continuity. I hope to find the best way to give the team my contribution soon.“