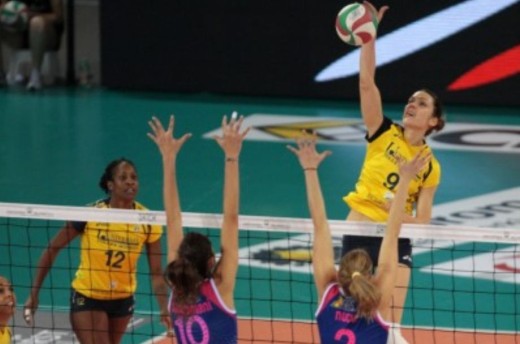 Coach Cuello: “There was a step to overcome emotionally today, and the team has been able to give a huge response when it was maybe easier to sit finding an alibi. Instead, we found the win and this is most important. The girls were able to get back in the game after the third set. From the technical point of view I have little to say. From the tactical point of view, however, I can say that we prepared this race extraordinarily well.“

“Aguero had given so much in the first set. Shee also had some problems that could keep her out of the game, but she still wanted to make a contribution and I knew that at one point I had to put someone else in. Natalia has done well. Francesca was good. Alisha found the right way.“

Anja Spasojevic: “Maybe I made a couple of mistakes in the first half, but they defended very well. Later I played better, but the important thing, the most important thing was the win. We shown a lot of character, we found determination and right attitude to really make everything we had prepared and I am very pleased because it was not easy, especially after the third set.“