Drama was the characteristic of the penultimate phase of the Mexican Volleyball League. Cocoteros of Colima didn’t succeed in two matches as visitors to Chihuahua to face the Regional University but kept the second place of the standings in their quest for a place in the Final Four on March 7-8. On Sunday, with the score one point in favor of the hosts and in one of the last actions of the match, one player of Cocoteros couldn’t receive the ball to set the play for a teammate. 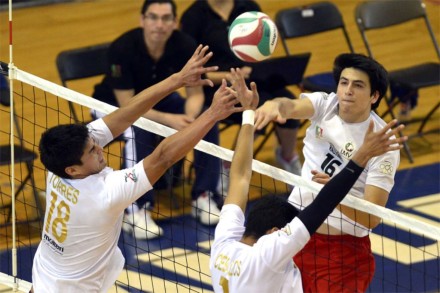 The penultimate phase of the Mexican Volleyball League left the Cowgirls of the Chihuahua Regional University virtually with a place in the Final Four to decide the national champions on March 7-8. They lead the circuit and only a catastrophe will had them out.

The crowd at Rodrigo M. Quevedo Gymnasium of Chihuahua during the weekend enjoyed a couple of victories of the Cowgirls over Cocoteras of Colima, 3-0 on Saturday and 3-1 on Sunday.

Talk about Cowgirls is to make reference to one of the teams with biggest winning tradition in Mexican volleyball. The URN, as they are known, won the national championship of First Force in 2013, and of Second Force from 2011 to 2013.

It is one of the most feared teams in the circuit. Gamaliel Ruiz Molina has been the coach of URN since 1996 and has been at the helm of the National Team in the tournaments of Cuba in 1996 and 1997, Puerto Rico 2002 and Monterrey 2006.