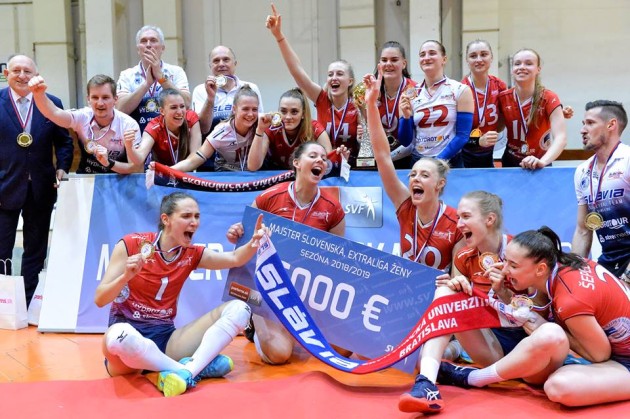 Slávia EU Bratislava, who appeared in finals of all 27 editions of the country’s top division, beat the defending champions Strabag VC Bratislava in the parfems.sk extraliga ženy 2018/2019 playoff finals by a 3-2.

The second seed Bratislava had a 2-1 in the series against the top seed Slávia but was unable to inflict the ultimate blow to the city rivals so the last season’s title will remain their only one so far in the club history. By the way, these two have met in the finals for the third straight time.

As for a decisive Game 5, Slávia needed four sets to overcome Bratislava, partially 25-11, 25-20, 30-32, 25-17, mostly thanks to an American middle blocker Kelsey O’Neill who played her first professional season after competing for the University of Pittsburgh Panthers and University of Iowa Hawkeyes. She scored 18 points in Game 5. Romana Hudecová noted 18 as well, but for Bratislava.