After two rounds of action are completed, the home heroines of the Czech Republic keep firmly the top of the standings. On Friday the girls mentored by Leos Chalupa got past their opponents from Hungary in three sets. 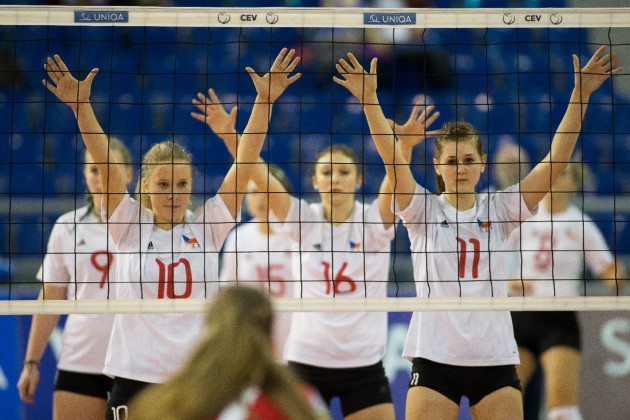 On Friday the girls mentored by Leos Chalupa got past their opponents from Hungary in three sets (25-13, 25-15, and 32-30) to score their second consecutive win in the Pool. The home side clearly asserted its supremacy in the first and second set anchored by Michaela Mlejnkova in attack and also via a very solid performance from the serving line, with Lucie Nova standing out in this fundamental. Hungary, however, fought back in set 3 and eventually missed out on a series of set balls in what was a dramatic final rush. The Czechs ultimately pocketed that section with the score of 32-30 and could celebrate their second win in front of their home fans.

“As they had opted for a separate warm-up, I think our opponents wanted to put some pressure on us” said Czech mentor Leos Chalupa after the game. “However, they did not surprise us and we played extremely well in the first two sets and repeated this by the end of set 3 where it counted the most, so I am satisfied”.

“We played really well in the first and second set where Hungary seemed not able to respond. In the last phases of the second set we started struggling a bit and this eventually turned into a good start for Hungary in set 3. However, in the end we could come back and finish it off in straight sets, so this is good” stressed Czech player Marie Kurkova.

“My players looked scared and nervous for the first two sets and hence did not play as they should have done. We are working hard to find the right team work and we eventually succeeded in doing this in the third set but it was already too late to change the course of the game. The separate warm-up was a tactical decision that we made in order to surprise the Czechs a little bit” pointed out Hungary’s head coach Attila Nagy.

One of the pre-favorites for the pass available to make it to the final round of the Championship, i.e. Germany, debuted on Friday by easily downing Lithuania in straight sets (25-6, 25-14, and 25-14). Germany was evidently too strong for the young girls from Lithuania who have to improve the quality of their performance if they want to finish the tournament with at least one win. Wiebke Silge top scored for Germany with 14 points including 4 blocks and 2 aces.

“The first match is never easy but we quickly found our pace and eventually cruised to the win with ease. It was good that we played our first match against a relatively weak opponent. We still have to improve the quality of our defense” said Germany’s head coach Jens Tietböhl. “We looked a little nervous at the beginning but I think that the fact we had an extra day for training after our arrival here in Brno helped us”.

“Germany definitely deserved this win. They are taller and stronger than us; we played our best but this was not enough. Still we would like to finish the tournament with at least one win” concluded Lithuania’s team captain Urte Andriukaityte.