Slovakia, Poland and Bulgaria all prolonged their winning streak by edging their respective opponents – i.e. Israel, England, and Portugal – in three straight sets. Read the latest news from volleyball world on worldofvolley.com. 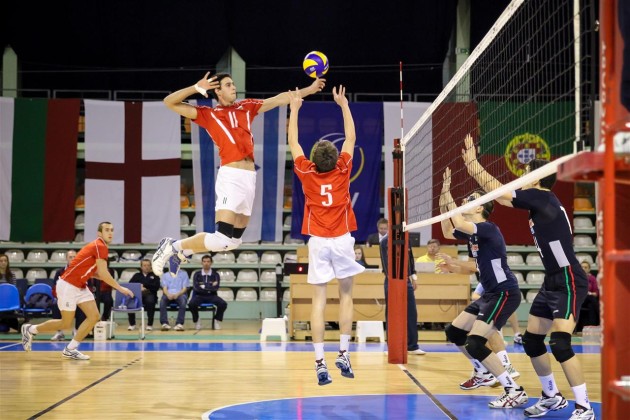 In the first match of the day Poland easily disposed of England in straight sets (25-13, 25-14, and 25-14). Poland comfortably controlled the game all the way through and eventually got another three points for the standings of the group. “This game was quite similar to the match we had played yesterday. Portugal and England are weak opponents and the real tournament will start for us tomorrow against Bulgaria” said the head coach of the Polish team Wieslaw Czaja. “We played better than we did yesterday, but Poland is a very strong team. I am happy that we did our best and we will now concentrate on the next match against Israel” added Rogerio Ponticelli, the mentor of the English team.

Pawel Gryc was the best scorer for Poland with 11 points, while Leon Davis-Chambers registered 5 for England.

In Friday’s second match Slovakia cruised past Israel in straight sets too (27-25, 25-16, and 25-21). The first set was very close, but the home team finally pocketed that section with the score of 27-25. In the second Slovakia opened with a terrific 13:0 and that paved the way for the final 25-16. After claiming that match in straight sets Slovakia has got six points and is hence in full contention for a ticket to the final round of the Championship. “I am happy with the result, but we didn’t play well and our players looked a little bit nervous. We had problems in reception and we didn’t push with the service in the first set. We have to play better tomorrow as we face Portugal” stressed Slovak head coach Miroslav Palgut.

“We played good in the first and third sets. But we have some objective problems because we have short players in the middle and we can’t score by blocking. In the end of the sets we missed a good block also in easy points. We made some good offensive actions, but it is not enough for this level. I congratulate the Slovakian team on their win, they have played good” added the head coach of team Israel Jacob Herchko.

Spiker Filip Gavenda was the best scorer for Slovakia with 20 points, while Iliya Goldrin collected 15 for Israel.

In the last match of the day Bulgaria topped the young guys from Portugal also in straight sets (25-14, 25-15, and 25-22). Bulgaria played very well in the first two sections of the game, only the last set was close. “We have played much better than yesterday, but day by day we have to improve our game which is normal in this kind of tournaments. Tomorrow we will play against Poland and it will be a much stronger opponent” said the head coach of team Bulgaria Ivan Halachev.

“Bulgaria was stronger in service and blocking and we didn’t have any answer to fight with such a strong team. Our players didn’t follow the game plan we had worked out and the result is there. Tomorrow we will play against Slovakia and it will be a crucial game for us. We will see what will happen” added Portugal’s head coach Ricardo Rocha.

Mihail Tsvetanov and Milen Iliev collected 15 points for Bulgaria; Bernardo Martins was the best scorer for Portugal with 13.

New Rules of the Game online

OFFICIAL – FIVB calls for release of...