Edwin Benne, recently issued a list of players that he has retained for the season 2013 where the “Oranjes” will be very busy with a series of international competitions, starting with the first qualification round for the 2014 FIVB World Champs scheduled for May 23-26 in Croatia. 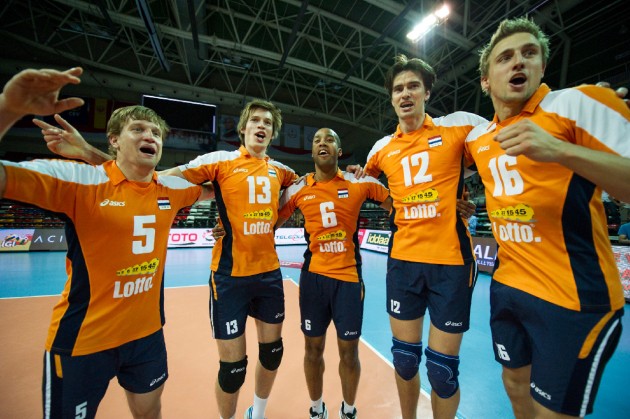 After winning last year’s CEV Volleyball European League, the Netherlands will join this season the FIVB World League playing Canada, Japan, Egypt, Korea and Finland in the prelims. The second major highlight of the season will be the final round of the European Champs with the “Oranjes” that were assigned by the DOL to the preliminary group taking place in Herning (DEN) to play there 2011 European champions Serbia, plus Finland and the winner of the third round home and away matches starring Slovenia and Croatia.

After missing out on the past season, Sjoerd Hoogendoorn – best scorer of the 2010 CEV Junior European Championship in Bobruisk, Belarus – is back in the group with Benne having selected, for the first time, also another youngster, namely Michael Parkinson who is playing this season in Belgium for Noliko MAASEIK. Tony Krolis is not included in the list as he has suffered an injury to his Achilles tendon and his complete recovery for the 2013 season is questionable.

The season will get started with a training camp in Cyprus through April 28-May 12 to get well ready for the first qualification round along the way to the 2014 Worlds where the Netherlands will be playing the hosts of Croatia, plus Bosnia & Herzegovina and Azerbaijan.

The group pre-selected by Benne includes the following players:

“This year’s program is a worthy follow-up to a successful 2012 season and provides a major challenge and opportunity for us with a relatively young team to continue to improve. The guys who have contributed to the success of last year are now given the opportunity to play at the highest level” coach Benne says.