LP SALO wrote history for Finland’s Volleyball family by turning into the first club from “Suomi” capable of making it to the semifinal stage of the European Cups. The players of LP SALO did so by first edging Khimik YUZHNY of Ukraine 3:2 in the return fixture scheduled for the 1/4 finals and then they seized also the golden set (15-13). Read latest volleyball news on Worldofvolley.com. 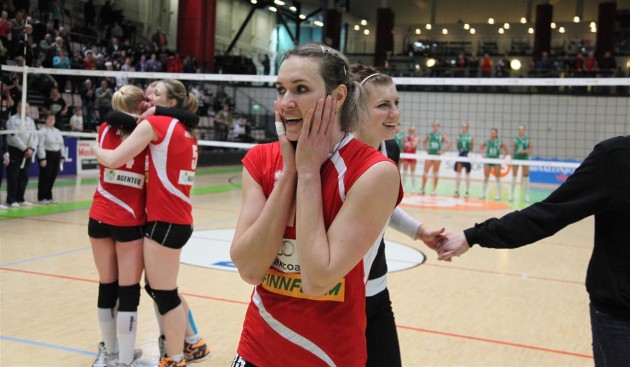 In the semis LP SALO will be playing Russia’s Dinamo KRASNODAR that edged twice Turkey’s Ilbank Sports Club ANKARA in another 1/4 final fixture.

“This is just amazing. We have been going through a series of ups and downs in this match and we played superbly in the golden set” a euphoric head coach Kari Raatikainen says. “I still can’t realize we have made it” team captain Kaisa Jokinen adds. “This match took us a lot of energy but we were able to keep cool up to the very end. It’s just great”.

The guests from Ukraine had caught the better start leading the way 8:4 at the first technical time-out of the opening set but LP SALO clawed back to level the score at 13. A series of three aces scored by Tetyana Khyliuk restored Khimik leadership (14:19) and though YUZHNY went up 19:24, great serving by Dubravka Stojanovic powered back LP SALO that eventually cashed the set at 26-24.

The second set was extremely close too and turned into a real marathon where both teams could not capitalize on various opportunities to finish it off before LP SALO did so at 33-31.

Khimik YUZHNY regrouped in set 3 (5:9) and though LP SALO fought their way back (12 all), this time the guests could impose their quality and rhythm (14:19) and did not lose composure even in the final rush (18-25).

Set 4 started with the Ukrainian players clearly imposing their supremacy and good serving by Olena Novgorodchenko contributed a 0:5 that set the tone for the remainder of the set (12-25).

One of the young players included in the roster of LP SALO, Noora Kosonen, helped the home side get off to a flying start in the tie-break (6:2) and captain Kaisa Jokinen then could widen the gap (9:3). Khimik stormed back (10:8) but it was not enough as LP SALO finished it off at 15-9 to call for the golden set.

There Khimik could get a provisional lead (1:4) and kept it until teams changed sides of the court (3:8); via great blocking and superb actions in defense LP SALO could find their way back into the game (7:8) and then did a terrific job to wrap it up at 15-13 with a spike killed – curiously – by their Ukrainian hitter Olena Kozyriatska.