Poland’s Bank BPS Fakro MUSZYNA got on Thursday night the right to challenge Fenerbahce SK ISTANBUL in the final of the 2013 CEV Volleyball Cup – Women. This and other volleyball news read on Worldofvolley.com. 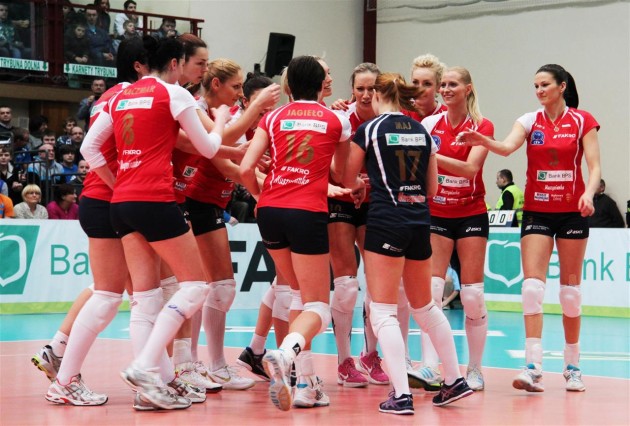 After pulling off a 3:2 away win last week in Siberia, the home heroines of Bank BPS Fakro downed Russia’s Omichka OMSK REGION in straight sets (25-22, 25-19, and 25-17) in the return round of the semis to vie for their first European trophy.

Bank BPS Fakro started out very solid by scoring the first couple of points but the score remained very close halfway through (12:12). However, the home side could gradually impose their quality and closed the set at 25-22 to set the tone for what was going to follow in the remainder of the match.

After a close opening, Bank BPS Fakro MUSZYNA went up by two points at the first technical time-out of the second set (8:6) but Omichka responded well, going to the front although with the slimmest margin (15:16). As the final section of the set was approaching, the guests from Russia did gradually lose composure and struggled with the terrific blocks displayed by MUSZYNA. As the home side had moved up 19:16, Omichka head coach Zoran Terzic searched for refuge in a time-out but could eventually not stop the march of the local favorites (25-19).

Bank BPS Fakro did not lose their focus also in the early phases of the third set (8:6) and widened the gap to seven points by the time the second technical time-out was called (16:9). As they were getting closer to their goal (21:14), the home heroines conceded some more points to their rivals before Valentina Serena wrapped it up at 25-17 for a classy home win and a ticket to the final.