After Morocco victory against RD Congo 3-0 (25-19, 25-16, 25-23) in the fifth and last day of the preliminary round at the 2013 Men's Junior African Nations Championship in Tunisia, the FIVB World Championship ticket has become no more a dream for the Moroccan team. Read latest volleyball news on Worldofvolley.com. 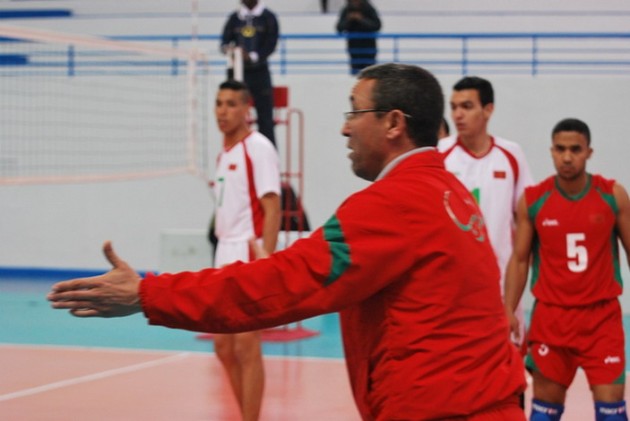 The victory means that Morocco secured a ticket to the semifinal of the competition and according to the new quota for Africa at the FIVB prestigious as Africa has 4 berths to qualify to Turkey later this year, Morocco will be there.

The happiest member of the team was the Head coach Brahim Bouchdouk who finally achieves his dream of playing at the highest level of volleyball at this age category.

“I conducted the promising stars of volleyball in most of my coaching career and since I begin in 1990 with the Moroccan youth team, I had one dream; this is to qualify to the World championship with my country Morocco and now this is no more a dream because my team turned it to a reality,” Bouchdouk said after the match.

“I refused to work outside my country to make money because of that dream. I’m fond of working with the youth and junior teams because at this age you can do a lot and also you can change everything with the players, the techniques, tactics and also the behaviour,”

“I worked with this team since 5 years when their age was 14 to 15y and even when I left them for a while to take care of the older age, I was following up them carefully till I had them in their top performance again for this competition to achieve my dreams. We worked hard for 18 month and now we are looking forwards to show our consistency at the world championship,” he added.

“We are happy with the performance of our setter Amine Zayani and the attacker Zouhair El Graoui and we hope them on time during the World Championship,”

Bouchdouk started his coaching career in 1990 with the Moroccan Youth team for 4 years before he shifted to the women side to conduct FAR team in Morocco 1994 to 2000 where he was appointed also as a coach for the Moroccan senior team.

He coached Morocco youth and junior teams from 2008 till the moment when he put all his experience to conduct the junior team to the World Championship in Turkey.

Marouf and Kovač – “Terrible and embarrassing!...