Egypt, Algeria and Tunisia have secured the three CAVB vacancies for the 2013 FIVB Girl’s U18 World Championship in Thailand. Egypt clinched the 2013 Girls Youth African Nations Championship title following their victory over Algeria on the third and final day of the competition at the Army Club Hall in Cairo, while Tunisia booked their World Championship ticket with a second victory against Rwanda 3-0 (25-21, 25-15, 25-15). Read latest volleyball news on Worldofvolley.com. 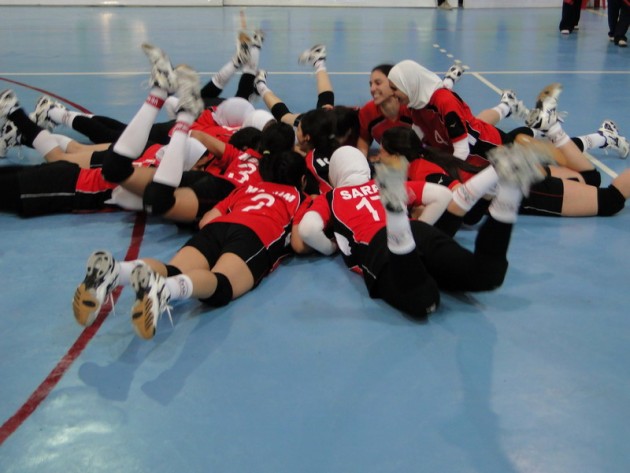 This is Egypt’s second consecutive championship title. The Egyptian team won the final against Algeria 3-0 (25-23, 25-19, 25-16) in a match lasting 79 minutes. Although Algeria began the match well with Yassmine Abdelrahim and Nawel Hammouche leading the way, Egypt made a return to win the first set narrowly with a score of 25-23.

Egypt then led the second set 6-1 and 16-9 with setter Mariam Ibrahim and centres Haidi Kandel and Aya Khalid to win the second set 25-19. The team continued to dominate the third set even after coach Tahani Tosson introduced changes in the line-up.

“I’m happy to win the cup but we have now to concentrate on the World Championship because the competition there will be very tough,” said Tosson. “I want to thank my players for their efforts during the competition especially in the final match against Algeria today.”

Tunisia finished in the second position (2-1) and Algeria in third (1-2) ahead of Rwanda who ended the Championship at the bottom of the table.

In their match, Tunisia defeated Rwanda 3-0 (25-21, 25-15, 25-15) in 68 minutes. Rwanda showed their strengths in the first set after the efficient work of spiker Seraphin Mukamtambara. However, Tunisia’s blocking and defence served them well, giving them a 25-21 win. With the steady work of Tunisian spiker Jihen Mohamed, the Tunisian team won the second and third sets to take the the match 3-0.

“I’m happy with the performance of my players today,” said Tunisian coach Rym Ben Slimane. “We played carefully in the first set as the Rwandan team played very well, but my team was in peak performance to win the second and third sets widely.”

Rwanda’s coach Paul Bitok expressed his disappointment after losing the three matches and his team’s last place finish. “We had a problem with our main setter so we suffered in our attacks. We lacked the proper preparation but we have a good team to work with in future,” he said.

The FIVB Girls’ U18 World Championship will take place from July 26 to August 4 in Nakhon Ratchasima, Thailand.