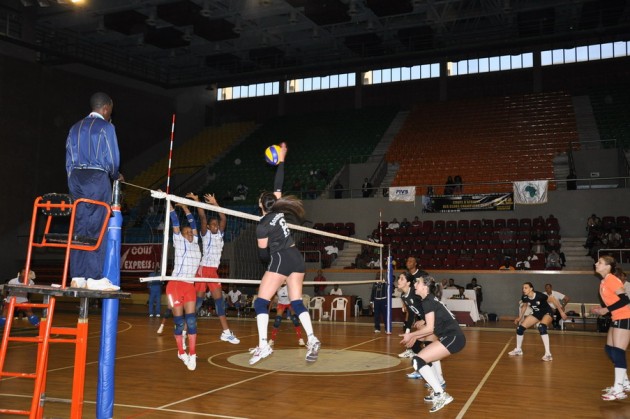 The remaining three vacancies in the quarterfinals will be settled on the third and final day of the preliminary round on Saturday.

Playing at the Palais des Sports in Antananarivo, the two Kenyan teams claimed their second victories in their corresponding pools. Defending champions Prisons defeated Water Sports (Ethiopia) in Pool B and while Pipeline – runners-up in the previous tournament – overcame Ndejje University (Uganda) in Pool C.

Algeria‘s GS Petroliers claimed their second victory – against Kutlwano in Pool B – while Bejaia achieved a win in their first match in the three-team Pool A to secure a quarterfinal berth with APR of Rwanda, who were idle on Friday.

Ahly (Egypt) picked up their second victory against VB Diamand Club (Madagascar) in Pool D but still need to secure a place in the quarters.

FAP (Cameroon) recovered from a first-day loss to secure their first victory by beating AS Tanda (Cote d’Ivoire).

Bejaia downed organisers Stef Auto (Madagascar) in an exciting encounter lasting 97 minutes. After Bejaia easily took the first set, they led 21-17 in the second before stumbling with a series of errors that allowed Stef Auto to draw level at 1-1. The Stef Auto players put up a strong fight thereafter, forcing Bejaia to work hard for their victory.

GS Petroliers of Algeria pulled off an easy victory over Kutlwano (Botswana) in 55 minutes. The Algerian team used good spikes and tactical serves to put pressure upon Botswana’s weak reception. The Algerian players – especially Zohra Ben Salem – were able to score many service aces, allowing the Algerian team a comfortable victory.  GSP improved their win-loss ratio to 2-0 to secure a spot in the quarterfinals, while Kutlwano dropped to 0-2.

Defending champions Prisons crushed Ethiopia’s Water Sport in straight sets in an hour of thrilling action. Prisons’ coach used his top players from the start of the match, allowing them to dominate in the first two sets. With the improvement of the Ethiopian defence, Water Sport managed to lead on several occasions in the third set before Prisons regained their rhythm. The victory improved Prisons’ record to 2-0, while Water Sport dropped to 0-2.

Kenya’s Pipeline clinched their second victory despite strong early form from the Ugandan team. But Pipeline’s experience helped them, especially that of setter Janet Wanja. The Kenyan team dominated the match in the second and third sets to win comfortably. Pipeline improved to 2-0 to secure a quarterfinal ticket. Ndejje University dropped to 1-1 but remained in contention for the second ticket from Pool C.

Burundi’s Les As achieved their first ever victory in the African Club Championship, beating Manga Sport of Gabon in 81 minutes after dropping the first set. Les As improved their record to 1-1, while Manga Sport dropped to 0-2.

Egypt’s Ahly continued with their winning rhythm and outclassed VB Diamand of Madagascar in 59 minutes. Egypt coach Mamdouh Isamail used substitutes to give them some playing time before the important matches in the knockout stage. Diamand played a good match in the first set and succeeded in leading early on, but Ahly gradually controlled the match and won in straight sets. Ahly improved to 2-0, while Diamand dropped to 2-0.

FAP of Cameroon overcame their loss in their first match to Ahly and claimed their first victory, against Cote D’Ivoire’s AS Tanda. FAP used their service to disturb the Ivorian team and put pressure on their defence. Both teams now have a 1-1 record.