YEC F: Italy sailed to a hard-fought 3:1 win versus Serbia 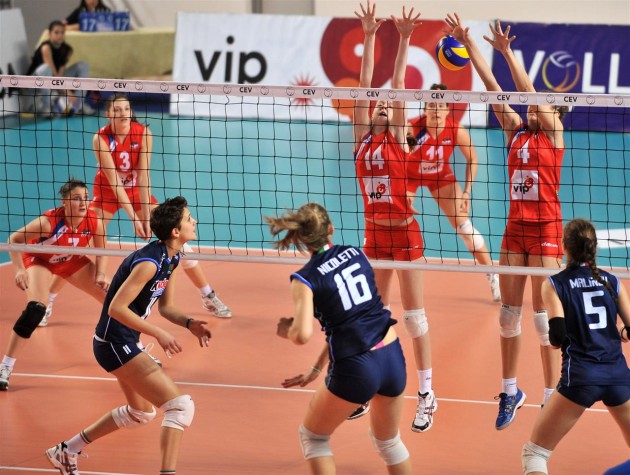 World No. 3 Italy sailed to a hard-fought 3:1 win versus Serbia in Saturday’s first semifinal of the 2013 CEV Youth Volleyball European Championship – Girls in Bar, Montenegro. Except from the second set, the young Serbian talents couldn’t hold the pace of the remarkable Italian squad.

Italy’s Anna Nicoletti was the game’s top scorer with 18 points, while Sara Lozo earned 12 points for Serbia. It was well expected today’s first semifinal turned to a point-by-point basis which engaged the crowd with enthusiastic atmosphere. Both sides showed their strong determination in the first set. Serbia experienced the better start but Italy bounced back with sharp serves to draw level at 12-12. Neither one could build a leading advantage until at 21-21 a 4-0 run from Italy with a combination of blocking, hard-spike and service winners from Alice Degradi closed this important and intense opening set in Italy’s favor..

In the second set Serbia adjusted their reception maneuvers and setter Jelena Vignjevic efficiently triggered their 3 main gunners – Sara Lozo, Bojana Milenkovic and Maja Dordevic from all angles. A solid spike by Anna Nicoletti has turned the Italian downward trend, but the improved defense and reception of Serbia helped the East Europeans successfully tie the set score to 1:1. Italy had committed 13 errors in the second set.

Italians were not discouraged by the failure in the second period but instead quickly build a commanding lead at 8-3. On the other hand, their Serbian opponents seem not fully concentrated and incurred several unnecessary errors in reception and attack. Italian libero Marianna Maggipinto‘s solid defense saved several sharp attacks from both Lozo and Dordevic and Italy continued their upward track until 19-16. A service winner from Sara Bonifacio and two block kills from Anna Danesi gave Italy the 2:1 set lead.

Italy continued their solid performance from the third set and quickly forced Serbia’s head coach Marijana Boricic to request her first timeout at 2-6. The upcoming Serbian stars came back with a more solid show and well-spread attack tactic and closed the gap to 6-8; however, Anastasia Guerra‘s consecutive hits stopped the upward trend of Serbia and Italy never looked back.

Italy head coach Luca Pieragnoli: “I’m very happy for today’s win as the semifinal match is always a very difficult match to play. I am very satisfied with the game my girls have shown, not only those on the court but also the girls coming in from the bench.”

Italy captain Ofelia Malinov: “This was a very though match as Serbia is known as a very strong team. We were aware that during the match we would have difficult moments, but we were ready to react in an appropriate way.”

Serbia head coach Marijana Boricic: “Italy deserve today’s win. We knew they were playing at a very high level and did our best to stop them. Nevertheless, we are very happy with the qualification for the World Champs in Thailand what our principal aim before the tournament was.”

Serbia captain Jelena Vignjevic: “I think we were not focused enough today. Tomorrow we will to our best to win the match for the third place.”