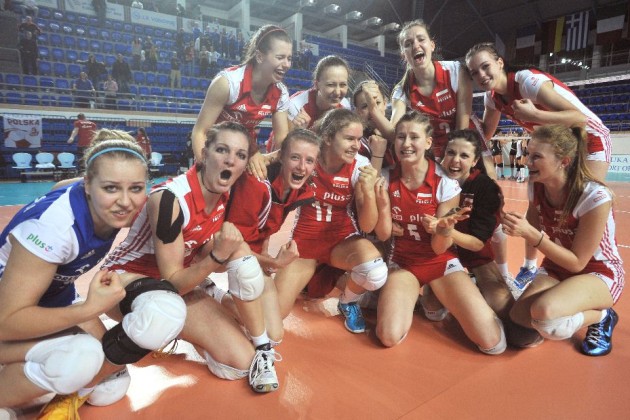 Poland overpowered titleholders Turkey in extremis to claim a merited spot for Sunday’s gold medal match of the 2013 CEV Youth Volleyball European Championship – Girls. The team of head coach Catma Sahin came back from behind but eventually couldn’t stop exceptional Poland in the fifth and deciding set.

Aroguz Pelin from Turkey scored 23 points and was the top scorer while the Polish best attackers Malwina Smarzek and Magdalena Damaske obtained 20 and 17 points respectively.

Two Polish famous gunners Malwina Smarzek and Magdalena Damaske quickly showed their on-fire momentum with sharp attack from both sides of wings and led their team to a 15-13 advantage in the first set. Titleholder Turkey remained strong in attack and block but was struggling with their poor reception which gave the Poles several points directly. The tight and intense pattern lasted until 23-23 before Damaske ended it with a dexterous spike via the Turkish blockers.

The second set was expected as still very intensive between the two hard fighting teams, but strong serving folks led by Polish Klaudia Grzelak turned the second period into a one-side game. The reigning champions did their best to catch up but couldn’t stop Poland’s impressive show.

Turkey fought back bravely with their tight floor defense and sharp spikes of Rida Erlalelitepe and Pelin Aroguz, which led Turkey to an undisputed 8-4 and 16-9 lead early in the third period. Turkey’s setter Arelya Karasoy stepped up in time to confuse Poland’s defense by fully utilizing spikers from all possible angles. The most important reason for Turkey’s comeback was – however – their better risk management at the net and behind the service line. Turkey took the third set with a six-point advantage.

Sensing an opportunity the young Turks looked to take quick control of the fourth set after the first technical timeout. Turkey showed their huge determination as they performed all-round better. Poland found no way to control Turkish opposite Aroguz crashing their defense. To encouraging applause from the few Turkish supporters, the Turks capitalized on their momentum and took the fourth set 25-21.

Turkey’s offensive errors were massive blows to their morale allowing Poland to bounce back early in the deciding set. The Poles made excellent defensive stops and attacked flawlessly against the Turks. Even though Turkey reduced a six-point deficit to one point at 10-11, it was already too late for a Turkish comeback. An out-of-court smash of Erlalelitepe ended the 128-minute contest in favor of the courageous Poles.

Poland captain Paulina Baldyga: “I’m crying and can’t control my emotions. We are so proud. It was an excellent example for infinite team spirit.”

Turkey head coach Catma Sahin: “Congratulations to Poland. We have to accept today’s defeat. In this age group, there are many ups and downs. Today Poland was a little bit luckier. I’m – however – still very proud of my players.”

Turkey captain Arelya Karasoy: “We made too many simple mistakes in the deciding set. It was enough to give Poland their hopes back.”

YEC F: Italy sailed to a hard-fought 3:1 win versus Serbia

CL: Matches of the week announced!