The Algerian duo of GS Petroliers and MB Bejaia booked their places in the semifinals of the 2013 Women’s African Club Championship in Antananarivo, Madagascar on Monday as Egypt's Ahly and Kenya’s Prisons also came through their quarterfinal bouts. 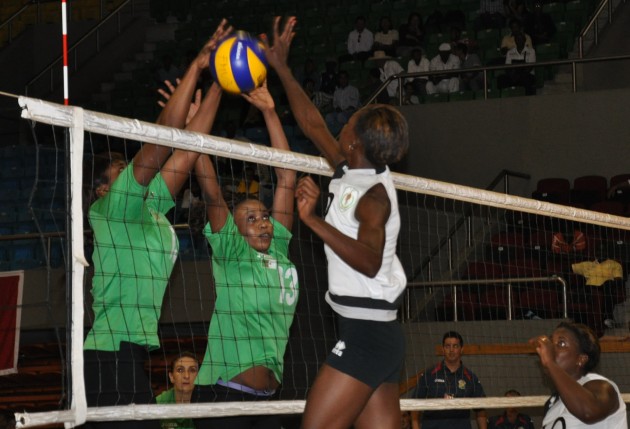 Ahly will now take on GS Petroliers while MB Bejaia face Prisons on Wednesday April 10 for a place in the final. The winners of the tournament will move on to the FIVB Women’s Club World Championship later this year.

In the Play off positions 9 to 16 Stef Auto (Madagascar), Water Sports (Ethiopia) and Kutlwano (Botswana) won their matches against VB Diamand (Madagascar), Manga Sport (Gabon) and Les AS (Burundi) respectively to advance to play for 9 to 12 standings with the already qualified AS Tanda (Cote d’Ivoire) leaving the loser for the 12 to 16 brackets.

The competition was stopped for a minute of silence to celebrate the memorial of the victims of the Rwandan Genocide against Tutsi in 1994.

Ahly has become the only team in the competition till now to win all the matches without dropping a set.

The competition will be resumed on Tuesday April 9 with the semifinals for the 9 to 16 positions.

Defending champions prisons regained their dominance over compatriots Pipeline as they swept their match 3-1 (17-25, 25-21, 25-14, 25-20) in a thrilling encounter lasting minutes

Pipeline succeeded to block well at the start of the match using the centers also for the quick attacks through position 3 a matter that disturbed Prisons tactics. Pipeline lead 8-3 at first TTO before Prisons tried to decrease the point deficit through setting to the left attacker Mercy Moim but Pipeline players finished the set in the best performance 25-17.

Prisons improved their defence in the second set, while their setter Jane Wacu started to arrange the combinations using Brackcide Khadambi and Moim to lead 8-6 and 16-14 at the TTOs. Pipeline struggled using the strong spikes from A Makuto and Roselyn Odhamaro but Prisons won the crucial points to finish the set 25-21.

Prisons started the third set with the same rhythm to achieve wide lead 11-5 before Pipeline arranged their block and decreased the mistakes to minimize the point difference. Again Prisons players were at utmost motivation to win the set 25-14.

Prisons controlled the fourth set from the start to widely lead 16-10 before Asha Makutoo played her best to decrease the point deficit through her spikes from position 4 to reach 19-18. Again Prisons’ experienced setter Wacu conducted the combinations to win the set 25-20 and the match 3-1.

Al Ahly (Egypt) secured the semifinal spot following their victory over APR (Rwanda) 3-0 (25-18, 25-15, 25-20) in 64 minutes. Ahly started the match with many changes in the positions and choices of the coach and through this they could advance from the start through the services of Svitlana Shvanska and the proper blocking of Mona Adly to win the first set 25-18

The second set showed improper reception from the Rwandan team allowing Ahly to extend their lead from the start till they won the set 25-15.

APR played their best in the third set and started to arrange their attacks through Brigitte and Atim to lead several times till 21-18 when they committed several mistakes that cost them to lose the set and the match 0-3.

The Algerian team started the match with the full line up as the setter fatma Okazi led the team to win the first set easily through her skilful combinations. The second set showed early activity for the Ugandan team who led at the start but again Petroliers led the net action to win the set widely. Ndejje struggled in the third set to save the match and tried to improve their block and attacks but the Algerian were too strong to win in straight sets.

The first set showed Algerian dominance through the sharp spikes form position 4 sent through the left attacker Fatma Djouad to lead permanently in the first set 8-5 and 16-11 till they won the set 25-18.

In the second set FAP emerged in the second set due to the improved block through Mbeza Aboa and they arranged their attacks through all the net positions to lead 21-17 when the Senegalese spiker of Bejaia Mame Ndiaye came to the service to score 7 consecutive points before the Algerians finished the set 25-22.

MB Bejaia players became more motivated to win the third set and so they dominated the set completely and win widely 25-15.

In all Madagascar clash Stef Auto hammered their compatriots VB Diamand in straight sets (25-19, 25-25-11, 25-20) in 58 minutes. Stef Auto dominated the match from the start till the end due to their better services and reception which allowed them to control also the net action and build up the attacks through the best player Rose Alfred. With this victory Stef Auto qualified to play for 9 to 12 positions while VBCD plays for 13-15.

Water Sports (Ethiopia) crushed Manga Sport (Gabon) in the competition fastest match 3-0 (25-6, 25-10, 25-11) in only 48 minutes. Water sport used all the power from their spikers using the weak state of Manga”s blockers and backline defence. The Ethiopian team will play for 9 to 12 standings while the Gabonese play for 13 to 15.

Kutlwano (Botswana) overpowered Les AS (Burundi) 3-0 (25-17, 25-11, 25-12) in a one side game lasting 53 minutes overwhelmed by Kutlwano through their arranged defence and strong spike services. Les As couldn’t withstand the strong spikes at the back of the court to lose without entering the game. Kutlwano will now play for the 9 to 12 positions while Les AS play for 13 to 15.

ITA W: Ilaria Angelelli out for 5 to 6 months

USA W: Larson not only official but...

Will anyone receive the damn ball?! Terrible...