Tauron MKS DABROWA GORNICZA and Aluprof BIELSKO-BIALA shared victories in the first couple of rounds as they are playing for making the final of this year’s national league in Poland. After losing the first clash 1:3, Tauron MKS got back on track by winning the second fixture in five sets. Read more volleyball news on worldofvolley.com. 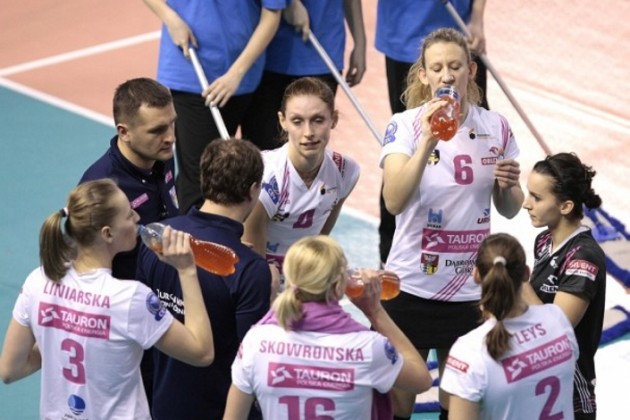 In the first game Tauron MKS got off to a flying start easily cashing the opening set (25-17) but things changed quite quickly as they started struggling on their way to finish off the rallies. Aluprof did perceive they had an opportunity to change the course of the game and they eventually exploited that chance. “It is difficult to comment after this defeat as they could play some fast Volleyball and they looked very confident and determined” Tauron MKS team captain Magdalena Sliwa commented.

In the second clash with BIELSKO-BIALA, the players mentored by Waldemar Kawka did show a totally different attitude and quality. They stepped up in every fundamental of the game and they went up 2:0 in sets before their opponents fought their way back to call for the tie-break. Tauron MKS went up 12:8 there but BIELSKO-BIALA flipped the tables around moving to the front at 15:14 before the hosts finished it off at 17-15 after middle-blocker Milada Bergrova suffered an ankle injury. “We really wanted to win in straight sets but did not show consistency in our play. It’s hard to explain what happened in our first game but what really matters is that after this win we are traveling to Bielsko-Biala in a good mood” opposite Katarzyna Zaroslinska stressed.